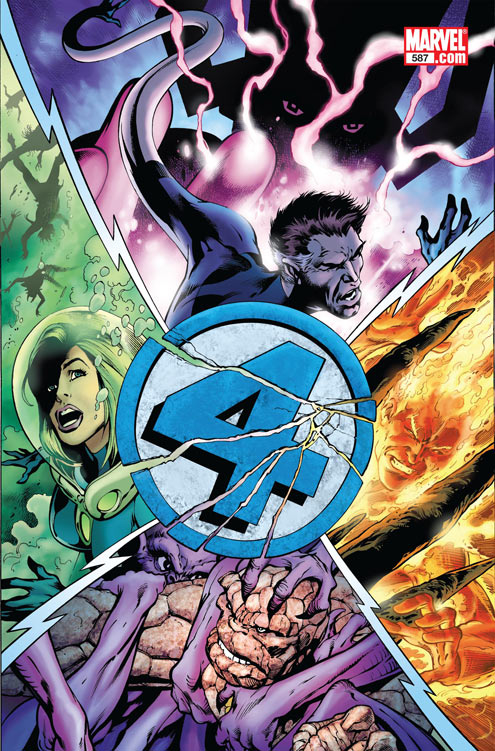 The Fantastic Four, scattered by various dangers from the Negative Zone to Atlantis to the Baxter Building, faced their greatest challenge, and one of their number, the Human Torch, made the ultimate sacrifice in Marvel Comics' Fantastic Four #587, the latest chapter in Jonathan Hickman and Steve Epting's "Three" storyline, giving the publisher the best-selling comic book in January.

In total, Marvel Comics took five of the top ten spots on the sales charts for the month. The Red Hulk teamed with the Avengers to combat the threat of the Infinity Gauntlet in Brian Michael Bendis and John Romita, Jr.'s Avengers #9, which ranked #5 for the month. The X-Men and Spider-Men teamed for a New York adventure in X-Men #7, which ranked #6. A night of the town turns dangerous in Bendis and Stuart Immonen's New Avengers #8, the #8 book for the month. Finally, Dan Slott and Humberto Ramos put Spider-Man through his paces as he hits the "Big Time" in the month's #10 ranked book, Amazing Spider-Man #651.

DC Comics had four of the top ten comics in January. Two issues of Brightest Day — issues #17 and #18 — were the number two and three books for the month, respectively, as Geoff Johns and Peter Tomasi's biweekly event builds towards its climax. Paul Cornell and Scott McDaniel's run on Batman and Robin reached its conclusion with issue #19, the #7 book for the month. Finally, Tony Daniels' Batman #706 ranked #9 on the charts.

Among other premier publishers, the finale to Joss Whedon's Buffy the Vampire Slayer "Sason Eight" storyline, Buffy the Vampire Slayer #40, placed at #25 on January's sales charts. IDW Publishing's top selling book for the month was Infestation #1, the first issue in their zombie crossover event that encompasses the worlds of Transformers, Star Trek, G.I. Joe, and Ghostbuster; Infestation #1 ranked #91 for the month.