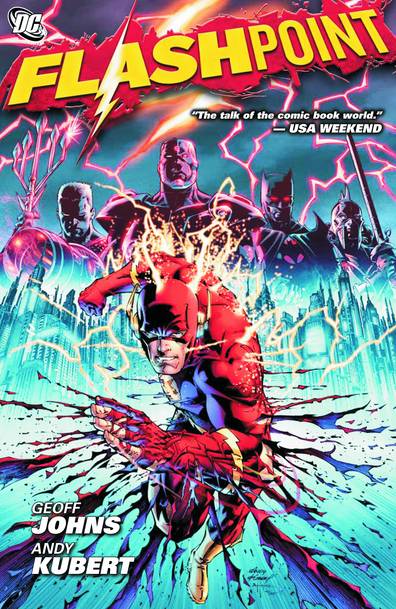 The Flash found himself in a dark and twisted reality in Geoff Johns and Andy Kubert's Flashpoint mini-series for DC Comics, and the collected hardcover edition of this event that led into the relaunch of the entire DC Universe was the best-selling graphic novel for the month of October.

In total, DC Comics had five of the month's top ten graphic novels. In addition to Flashpoint, Batman: Arkham City, the graphic novel by Paul Dini based on the best-selling Ubisoft video game, was the month's #3 graphic novel, and Grant Morrison and Frank Quitely's complete All-Star Superman trade paperback ranked #8 for the month. DC also had two books from their Vertigo imprint in the top ten — The Unwritten Volume 4: Leviathan ranked #4 and American Vampire Volume 1 ranked #6.

Image Comics had two books in the top ten, both related to Robert Kirkman's The Walking Dead, the best-selling zombie comic book that has spawned a television adaptation on AMC that has just begun its second season. The Walking Dead Volume 7 hardcover ranked #2 for the month, and The Walking Dead Survivor's Guide, a companion to the series, ranked #7.

Three other publishers each had one title in October's top ten.

Finally, Marvel Comics rounded out the top ten with Ultimate Comics Spider-Man: The Death of Spider-Man, the collected edition of the storyline that saw Peter Parker sacrifice his life to save his friends and family, at #10.

Finishing the Premier publishers, IDW Publishing's top book in October at #61 was Bloom County: The Complete Library Volume 5, the fifth and final volume of their complete chronological reprinting of Berkeley Breathed's acclaimed comic strip of the 1980s.