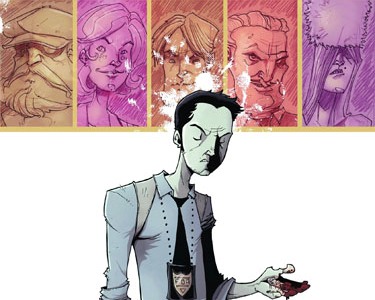 Image Comics had a surprise hit this summer with Chew, the story of a man who can see the past of anything he eats, and their collection of the first story arc in Chew Volume 1 was the best-selling Graphic Novel in November.

DC Comics had two books in the top 10 graphic novels for the month. Green Lantern: Agent Orange, a precursor storyline to the current Blackest Night crossover event, ranked #3, and Batman: Battle For The Cowl, collecting the mini-series event that put Dick Grayson, the former Robin and Nightwing in the cowl, ranked #4.

Data for Diamond’s sales charts – which include the monthly market shares and all top product charts – are compiled by Diamond Comic Distributors from a universe of over 4,000+ accounts, comprised of comic book specialty shops and other merchant stores and buyers. The shops are primarily located in North America, with a percentage of sales also to international stores and buyers located throughout the world. The account base includes not only brick-and-mortar comic book specialty shops, but also Internet stores, chain stores, and other specialty stores.