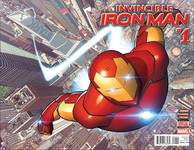 Marvel Comics had the top ten best-selling titles in October, including Dan Slott and Giuseppe Camuncoli's Amazing Spider-Man #1 at #2, Jason Latour and Robbi Rodriguez's Spider-Gwen #1 at #3, and Jason Aaron and Chris Bachalo's Doctor Strange #1 at #5, all part of the All-New All-Different Marvel relaunch.

Among the premier publishers, DC Entertainment's top book for October, Scott Snyder and Greg Capullo's Batman #45, fell just outside the top ten at #11 for the month.

Bob Gale's Back to the Future #1 was IDW Publishing's top book for October at #28.

Chuck Palahniuk's Fight Club 2 #6 was the best-selling comic from Dark Horse Comics at #60.

In addition, Chip Zdarsky and Erica Henderson's Jughead #1 from Archie Comics was the best-selling non-premier comic for the month at #71.