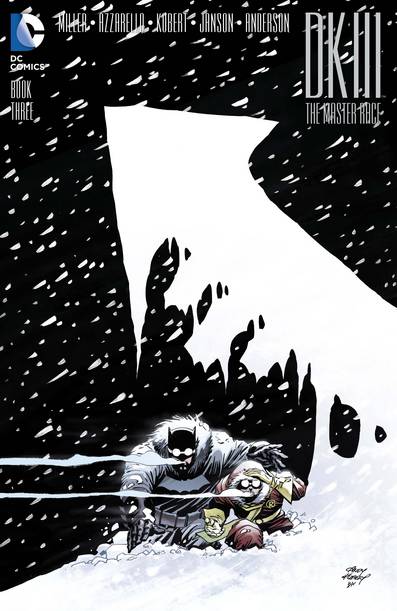 Batman ventures to the Fortress of Solitude to free Superman as the escaped Kandorians level their threats against earth in Frank Miller, Brian Azzarello, Andy Kubert, and Klaus Janson's Dark Knight III: The Master Race #3 from DC Entertainment, the best-selling comic book of February.

In total, DC Comics had three titles in the top ten, including Scott Snyder and Yanette Paquette's Batman #49 at #3 and Geoff Johns and Jason Fabok's Justice League #48 at #10.

Marvel Comics had seven titles in the top ten, led by Jason Aaron and Leinil Francis Yu's Star Wars #16 at #2. Also in the top ten were Brian Michael Bendis and Sara Pichelli's Spider-Man #1 at #4, Cullen Bunn and Salva Espin's Deadpool: The Mercs for Money #1 at #5, the anniversary issue Deadpool #7 at #6, Kieron Gillen and Salvador Larroca's Darth Vader #16 at #7, David Walker and Sanford Greene's Power Man and Iron Fist #1 at #8, and Dan Slott and Matteo Buffagni's Amazing Spider-Man #7 at #9.

Outside the premier publishers, Oni Press' Invader Zim #7 was the month's top non-premier comic book at #90.