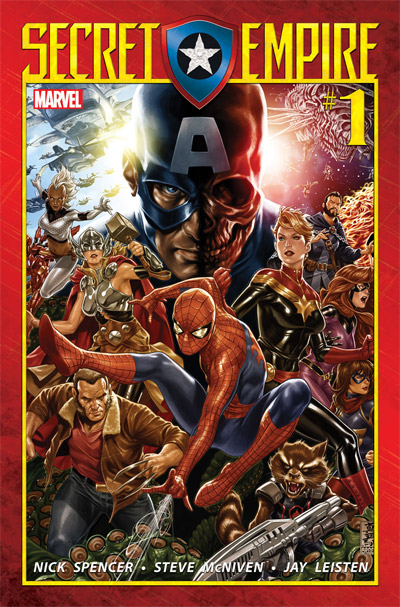 The United States is dominated by Hydra, with Captain America at its head, in Nick Spencer, Steve McNiven, and Jay Leisten's Secret Empire #1 from Marvel Comics, May's best-selling comic book.

DC Entertainment had three titles in the top ten: the lenticular edition of Batman #22, the third chapter of "The Button" by Tom King, Joshua Williamson, and Jason Fabok, ranked #3; the lenticular edition of The Flash #22, the final chapter of "The Button" by Joshua Williamson and Howard Porter, ranked #4; and King and Mitch Gerads' Batman #23 ranked #7.

Among the premier publishers, P. Craig Russell and Scott Hampton's Neil Gaiman's American Gods: Shadows #3 was Dark Horse Comics’ top book at #95, while IDW Publishing's top-ranked book was Batman/TMNT Adventures #6, the final chapter of their crossover with DC Entertainment, at #114.