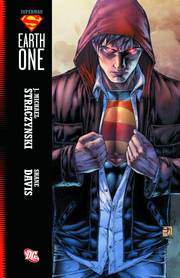 The Man of Steel was reimagined for a new generation by Babylon 5 creator J. Michael Straczynski and artist Shane Davis for DC Comics' original graphic novel, Superman: Earth One, garnering the publisher mainstream media notice and giving the publisher the best-selling graphic novel in the month of October.

Closing out the top ten was Naruto Volume 49 from Viz Media at #9, which was also the best-selling manga title for October.