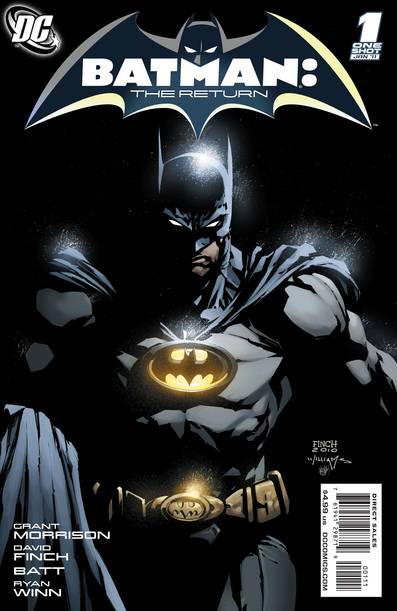 Gotham City's Dark Knight dominated the upper echelons of November's comic book sales charts, taking the top spot with Batman: The Return and five of the top ten. Batman: The Return from superstar writer Grant Morrison and fan-favorite artist David Finch introduced readers to the new status quo — Bruce Wayne returned from his apparent death and his resumption of the cape and cowl, his plans for the future, and the establishment of Batman, Incorporated.

In total, DC Comics had eight of top ten best-selling books in November, with five of those titles belonging to the Batman family. Batman, Incorporated #1, the first issue of Grant Morrison and Yanick Paquette's globe-trotting team-up book, ranked #2. Batman: The Return of Bruce Wayne #6, the final chapter of Bruce Wayne's travel through time, ranked #4. Batman and Robin #16, which saw the culmination of Batman's three-year battle against Dr. Hurt, ranked #5, and Batman and Robin #17, the first issue of Paul Cornell and Scott McDaniel's run on the title, ranked #10. Other DC Universe books in the top ten include Brightest Day #13 at #6, Brightest Day #14 at #7, and Green Lantern #59 at #9.

Marvel Comics rounded out the top ten in November with two books. Brian Michael Bendis and Tom Raney's Avengers #7 was their top book at #3. Amazing Spider-Man #648 kicked off the long-awaited "Big Time" storyline from Dan Slott and Humberto Ramos, and it ranked #8 for the month.

Among other Premier publishers, Dark Horse Comics' Buffy the Vampire Slayer #38, the second chapter of Joss Whedon's finale to the Season 8 storyline, ranked #30 and was the publisher's top-selling book in October. True Blood #5, based on HBO's hit vampire series, was IDW Publishing's top book at #80. Finally, The Walking Dead #79, Robert Kirkman's best-selling zombie series (and now a television series on AMC), was Image Comics' top book in Ocotber, ranked #60 for the month.