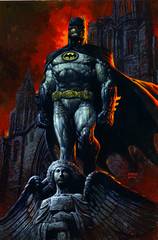 In total, DC Comics had eight of the top ten best-selling comic books for the month. Green Lantern #60, part of the Brightest Day storyline and a lead-in to the upcoming "War of the Green Lanterns" event, ranked #2. Brightest Day took two spots in the top ten — issue #15 at #3 and issue #15 at #4. Green Lantern #61 ranked #5. Grant Morrison's Batman, Inc. #2, which took Batman and Catwoman to Japan on a recruiting mission for Bruce Wayne's new global initiative, ranked #6. Paul Cornell and Scott McDaniel's Batman and Robin #18 ranked #7, and Tony Daniels' Batman #705 ranked #10.

Marvel Comics rounded out the top ten with two books from writer Brian Michael Bendis. The Illustrated by Stuart Immonen, the New Avengers recovered from their recent reality-warping adventure in New Avengers #7, the #8 best-selling comic book for the month. At #9, Bendis teamed with artist John Romita, Jr. to pit the Avengers against the Illuminati in Avengers #8.

Among other premier publishers, fan-favorite creator Joss Whedon brings the "Season Eight" near to its conclusion in Buffy, the Vampire Slayer #39, the #32 ranked book for the month. IDW Publishing's True Blood #86, based on the hit HBO series, was the west coast publisher's top book at #86. Finally, Robert Kirkman and Todd McFarlane's Haunt #12 was Image Comics' top-selling book in December, ranked #12 for the month.