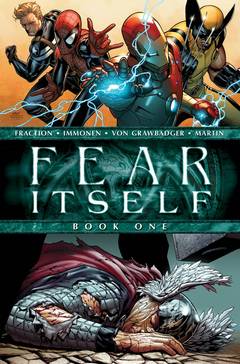 The awakening of the Serpent and Odin's removal of the Asgardians from Earth set the stage for Marvel Comics' next cataclysm in Matt Fraction and Stuart Immonen's Fear Itself #1, the first part of a seven-issue mini-series event and April's top selling comic book to comics specialty retailers.

In total, Marvel had six of the month's top ten best-selling comics. In addition to Fear Itself #1 atop the chart, Matt Fraction and Olivier Coipel's The Mighty Thor #1, which began a storyline that will pit Thor and the Asgardians against the power of Galactus, ranked #2. FF #2 from Jonathan Hickman and Steve Epting ranked #5. Avengers #12 from Brian Michael Bendis and John Romita, Jr. ranked #7 for the month, and Bendis, Mike Deodato and Howard Chaykin's New Avengers #11 ranked #9. Finally, Amazing Spider-Man #658 from Dan Slott and Javier Pulido ranked #10.

DC Comics had four of the top ten best-selling books in April, led by Geoff Johns, Dough Mahnke, and Keith Champagne's Green Lantern #65, a chapter in the "War of the Green Lanterns" storyline, at #3. The latest two chapters of the biweekly Brightest Day saga also placed in the top ten — Brightest Day #23 at #4 and the double-sized Brightest Day #24 at #6. Grant Morrison's Batman Incorporated #5, which featured a team-up of Batman and Batwoman, ranked #8 for April.