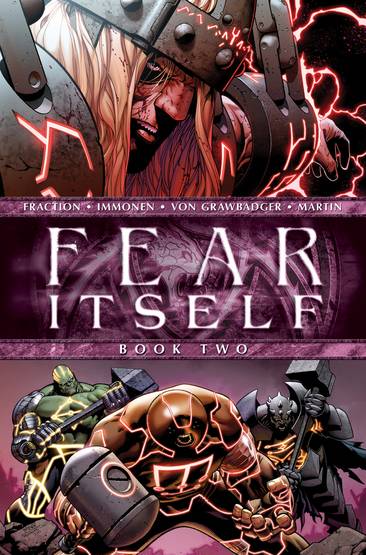 As the Serpent and his allies wage war on the Marvel Universe, Thor faces his greatest challenge in Matt Fraction and Stuart Immonen's Fear Itself #2, the second chapter of Marvel Comics blockbuster summer crossover event and the best-selling comic book sold in May.

In total, Marvel Comics had six of the month's top ten best-selling comics. A Fear Itself tie-in issue, Avengers #2 from Brian Michael Bendis and Chris Bachalo was Marvel's number two book, ranking #4 for the month. Also in the top ten were Jonathan Hickman and Steve Epting's FF #3 at #5; Hickman and Barry Kitson's FF #4 at #7; Bendis, Mike Deodato, and Howard Chaykin's New Avengers #12 and #9, and Christos Gage and Reilly Brown's Amazing Spider-Man #661 at #10.

DC rounded out the top ten with four books, with Geoff Johns and Andy Kubert's Flashpoint #1, the debut issue of a five-issue event that will remake the DC Universe, the publisher's top book at #2. Two chapters of the "War of the Green Lanterns" event placed in the top ten with Johns, Doug Mahnke, and Christian Alamy's Green Lantern #66 at #3 and Tony Bedard, Tyler Kirkham and Matt "Batt" Banning's Green Lantern Corps #60 #6. Grant Morrison and Chris Burnham's Batman Incorporated #6 closes out the top ten, ranked #8 for the month.

Among other premier publishers, Dark Horse Comics' Star Wars: Jedi — The Dark Side #1, the first issue of a mini-series about the early days of Star wars Episode I: The Phantom Menace's Qui-Gon Jinn, ranked #92. IDW Publishing's long-awaited The Rocketeer Adventures #1, the first issue of an anthology that continued the adventures of Dave Stevens' beloved 1940's hero, ranked #89. Finally, Image Comics' The Walking Dead #85 was the publisher's top book, ranked #40.