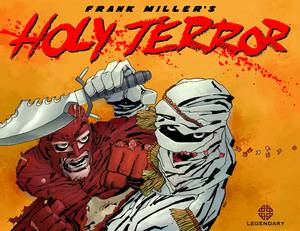 Legendary creator Frank Miller teamed with new publisher Legendary Comics for Holy Terror, an original hardcover graphic novel that pitted a costume vigilante against the forces of intolerance and terrorism, giving the publisher the best-selling graphic novel for the month of September.

DC Comics had two titles in the top ten, led by New Teen Titans: Games, the long-awaited hardcover graphic novel by the classic team of Marv Wolfman and George Perez; the volume debuted at #2 on the sales charts. Also on the charts was Brightest Day Volume 3, which ranked #7.

Finishing off the Premier Publishers, IDW Publishing's top book for September was Code Word Geronomo, which ranked #22 for the month.