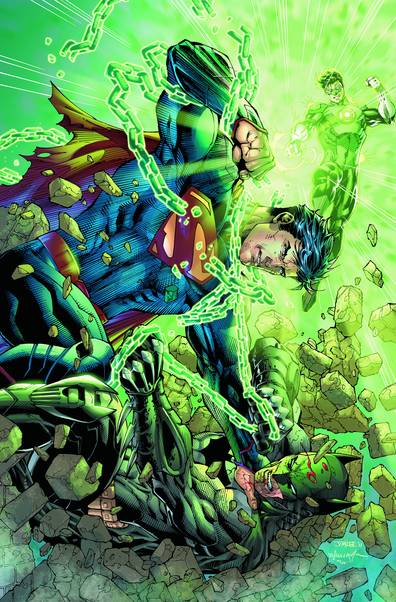 While Green Lantern and Batman reason with Superman, The Flash joins the heroes in their investigation of the alien attacks on Gotham City and Metropolis, bringing these heroes together for the first time in Geoff Johns and Jim Lee's Justice League #2 from DC Comics, the best-selling comic book to comics retailers on the month of October.

Marvel Comics rounded out the top ten with three titles at the top echelons of the sales chart. Jason Aaron and Marc Silvestri's The Incredible Hulk #1 was the publisher's top book at #7. Aaron and Chris Bachalo launched a new era for the X-Men with Wolverine and the X-Men #1 which ranked #8 for the month. Finally, the conclusion of Matt Fraction and Stuart Immonen's Fear Itself crossover event, Fear Itself #7, ranked #9.

Among the Premier publishers, Dark Horse Comics' top book for October was Buffy the Vampire Slayer Season 9 #2 at #64 which continued the adventures of Joss Whedon's vampire slayer. The Walking Dead #90 from Robert Kikrman was Image Comics' top book at #78. Finally, IDW Publishing's top comic for October was Teenage Mutant Ninja Turtles #3 at #109.