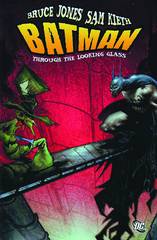 Batman tumbles into the hallucinogenic nightmare of Wonderland thanks to his first encounter with the Mad Hatter in Batman: Through the Looking Glass, an original hardcover graphic novel by Bruce Jones and Sam Kieth (The Maxx) from DC Comics, which was the best-selling graphic novel to comics retailers in January.

DC Comics had a strong month for graphic novels in January, taking five of the top ten spots on the sales charts. In addition to Batman: Through the Looking Glass, The Unwritten Volume 5: On to Genesis from the Vertigo imprint ranked #5, Grant Morrison's Batman: The Return of Bruce Wayne trade paperback ranked #6, Jeff Lemire's Sweet Tooth Volume 4: Endangered Species from the Vertigo imprint ranked #9, and David Finch's Batman: The Dark Knight Volume 1: Golden Dawn ranked #10.

Marvel Comics had one book in the top ten — the collected edition of Matt Fraction and Stuart Immonen's Fear Itself at #4.

Dark Horse Comics rounded out the top ten with B.P.R.D.: Hell on Earth Volume 2: Gods and Monsters at #8.

Finishing off the premier publishers, IDW Publishing's top-seling graphic novel in January was Godzilla: Kingdom of Monsters Volume 2 at #105.