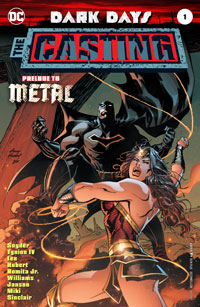 The mystery deepens for Batman and his allies in Dark Days: The Casting #1 by Scott Snyder, James Tynion IV, Andy Kubert, Jim Lee, and John Romita, Jr., DC Entertainment's prelude to their Dark Nights: Metal and the best-selling comic book of July.

DC Entertainment had three titles among the top ten. In addition to Dark Days: The Casting #1, Tom King and Mikel Janin's Batman #26, the second chapter of "The War of Jokes and Riddles," ranked #3 and King and Clay Mann's Batman #27, the third chapter in the storyline, ranked #4.

Image Comics rounded out the top ten with Robert Kirkman and Charlie Adlard's The Walking Dead #169 at #9.