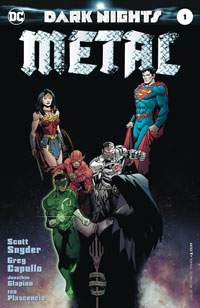 The Justice League learns of the threat posed by the Dark Multiverse and Batman makes an unexpected ally in Scott Snyder and Greg Capullo's Dark Nights: Metal #1, the first chapter of DC Entertainment's 2017 event and the best-selling comic book of August 2017.