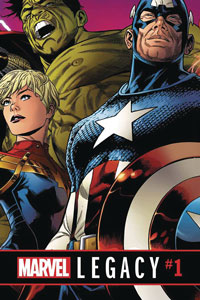 While an ancient secret is uncovered in South Africa, the Avengers battle Frost Giants in a secret government facility and an adamantium statue in Canada breaks open in Marvel Comics' Marvel Legacy #1, the launch of the publisher's new direction by Jason Aaron, Esad Ribic, and an all-star line-up of artists, and the best-selling comic book of September.