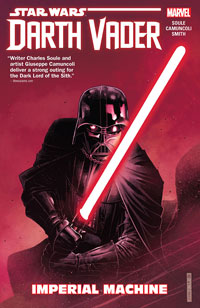 In total, Marvel Comics had five titles in the top ten, including Deadpool Kills the Marvel Universe… Again at #2, the Rogue One: A Star Wars Story Movie Adaptation at #6, Journey to Star Wars: The Last Jedi: Captain Phasma at #7, and Star Wars: Darth Maul: Son of Dathomir at #9.

Oni Press rounded out the top ten with Rick and Morty Volume 1 at #5.