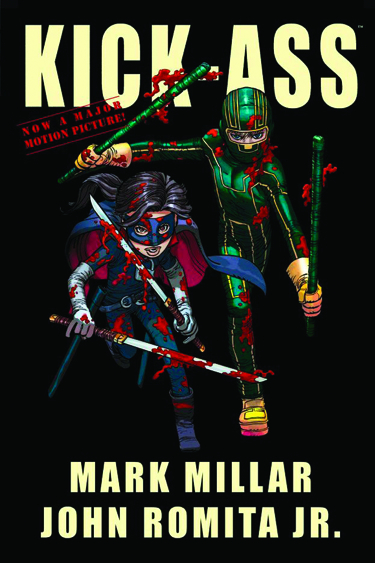 Mark Millar and John Romita, Jr.'s collected edition of Kick-Ass was the best-selling graphic novel for the month of April as the Kick-Ass Premiere Hardcover topped the sales chart for the second month in a row, its sales fueled by the just-released film adaptation from X-Men: First Class director Matthew Vaughn.

Marvel Comics had, in total, three books in the top ten for the month. In addition to Kick-Ass, the Ultimate Comics Wolverine Vs. Hulk trade paperback, collecting the mini-series from Lost's Damon Lindelof and Secret Invasion's Leinil Francis Yu, ranked #5 and Marvel Zombies 4 ranked #10.

DC Comics had two books in the top ten graphic novels. Batman and Robin Deluxe Volume 1: Batman Reborn collects the first two story arcs of Grant Morrison's Batman and Robin and ranked #2. The Flash: Rebirth from Geoff Johns and Ethan Van Sciver returns Barry Allen, the Silver Age Flash, to the DC Universe and placed #3 on the charts in April.

Rounding out the top ten were Avatar Press with Crossed Volume 1 at #6 and Raw Junior with Benny & Penny in The Big No-No! at #8.