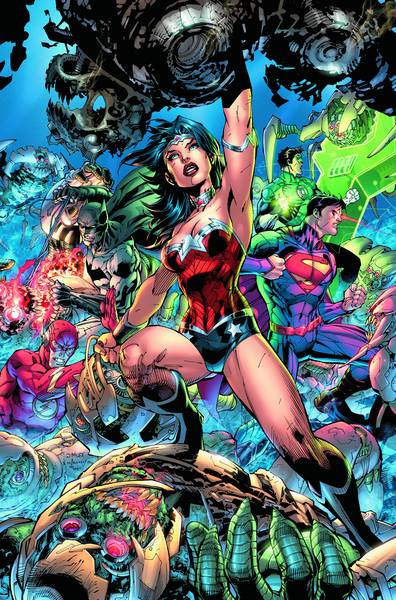 Wonder Woman and Aquaman enter the fray in the battle against the Parademons while Vic Stone is transformed into a new hero in Geoff Johns and Jim Lee's Justice League #3 from DC Comics, the best-selling comic book to comics retailers on the month of November.

Marvel Comics rounded out the top ten with four titles at the top echelons of the sales chart. Point One, the over-sized issue that reveals tidbits about the post-Fear Itself world, was the publisher's top book at #5. Zeb Wells and Joe Madureira's Avenging Spider-Man #1, the first issue of Spider-Man's new team-up title, ranked #6. Kieron Gillen and Carlos Pacheco's Uncanny X-Men #1, which introduced readers to Cyclops' new X-Men team and mission, ranked #7. Finally, Jason Aaron and Chris Bachalo's Wolverine and the X-Men #2 ranked #10.