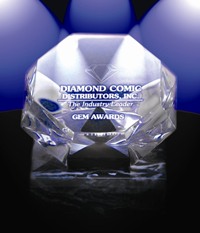 Embodying the very best of what the comic book specialty market has to offer, the Diamond Gem Awards offer retailers a fantastic opportunity to honor those that have been instrumental in helping their businesses grow over the past year. Why are they unique? The Gem Awards are the only industry awards 100% voted on by comic book specialty retailers!

The ballot for the 2016 "Gemmies" is available exclusively to retailers. Voting will end the first week in January, with winners annouced shortly thereafter.

Nominees were chosen by a panel of Diamond product specialists based on their overall impact on the industry, while comics and related merchandise were chosen on the merits of their sales performance and quality from the past year.

Some of the 2016 categories and contenders include:

2016 Backlist Publisher of the Year

2016 Original Graphic Novel of the Year

Look for the Gem Award Winners announcement during the second week of January!