Norman Osborn's Overreach Brings Marvel's Fractious Heroes Together to Defeat Him, Sending Marvel Comics to the Top of January's Sales Chart with Siege #1

Norman Osborn's plans to establish his stranglehold on the Marvel Universe reached a fruition as he launched his long-planned attack on Asgard itself and the heroes of the Marvel Universe united against him in its defense in Siege #1, the first part of the four-issue mini-series that marks the culmination of a seven-year-long storyline, giving Marvel Comics the bestselling comic book in January 2010, based upon total unit sales to comic book specialty shops, according to Diamond Comic Distributors.

Marvel Comics took the top publisher spot in January, leading in both the Unit Market and Dollar Shares categories, with a 42.56% Unit Market Share and a 38.77% Dollar Share for the month.

Just optioned by AMC for a television series, Image Comics' The Walking Dead from writer Robert Kirkman and artist Charlie Adlard has revolutionized zombie comics. The collection The Walking Dead Volume 11: Fear the Hunters gave Image the bestselling graphic novel in January in this collection of the series' latest story arc.

DC Direct's DC Dynamics statues bring the heroes and heroines of the DC Universe to life, and Tim Bruckner's vibrant take on DC's Amazon princess with the DC Dynamics: Wonder Woman Statue gave DC Comics the bestselling Toy product to comics specialty retailers in January. NECA/WizKids, for the third month in a row, had the bestselling games product to comics specialty shops with the Marvel HeroClix: Hammer of Thor Booster Packs, which relaunched the fan-favorite HeroClix miniatures game. 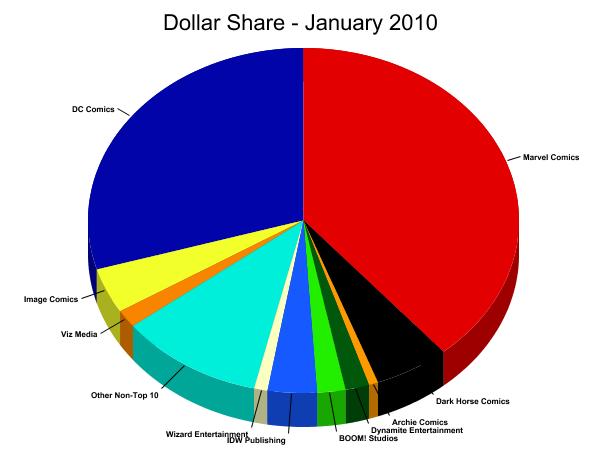 ABOUT DIAMOND COMIC DISTRIBUTORS—the world's largest distributor of English-language comic books and pop-culture related merchandise, Diamond is based in Baltimore, MD, and services more than 3,500 specialty retailers worldwide. For more information, visit Diamond on the web at www.diamondcomics.com.