(BALTIMORE, MD) — (April 6, 2010) — In the wake of the DC Universe's Blackest Night, a new dawn arrives in the form of Brightest Day #0, ushering in a new age of heroism with this prelude issue to the 26-part biweekly series and giving DC Comics the best-selling comic book in April 2010, based upon total unit sales to comic book specialty shops, according to Diamond Comic Distributors.

Marvel Comics took the top publisher spot in April with the company leading in both the Unit Market and Dollar Shares categories, for a 45.02% Unit Market Share and a 39.35% Dollar Share for the month.

With its sales driven by Lionsgate's just-released film adaptation, Mark Millar and John Romita, Jr.'s, Kick-Ass was the best-selling graphic novel to comic shops in April, putting this Marvel Comics' title atop the chart for the second month in a row.

DC Direct brought the heroes and villains of their best-selling comic book mini-series Blackest Night to life, and the Blackest Night Series 4 Action Figures, featuring characters such as Star Sapphire Wonder Woman or Green Lantern Kyle Rayner, gave DC Comics the best-selling Toy product to comics specialty retailers in April. NECA/WizKids' latest expansion for the HeroClix miniatures game, the DC HeroClix: The Brave and the Bold Expansion, gave the publisher the best-selling game product to specialty retailers for the month. 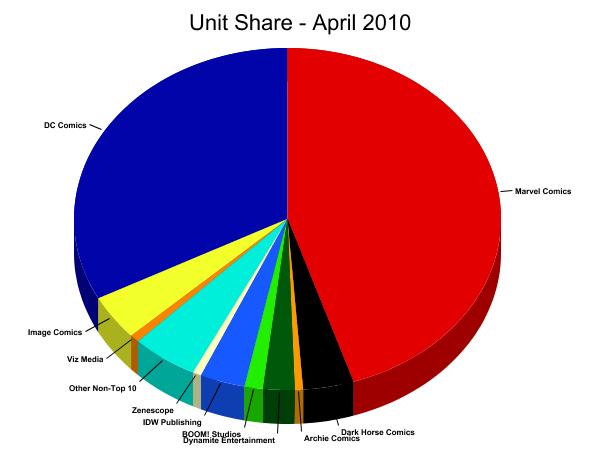 ABOUT DIAMOND COMIC DISTRIBUTORS — the world's largest distributor of English-language comic books and pop-culture related merchandise, Diamond is based in Baltimore, MD, and services more than 3,500 specialty retailers worldwide. For more information, visit Diamond on the web at www.diamondcomics.com.