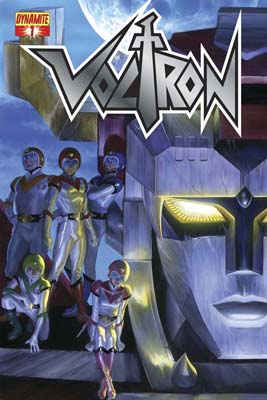 This December, the pop culture phenomenon known as Voltron is returning to a comic book store near you!  Under a series of amazing covers by master painter Alex Ross, and written by Dynamite's own up and coming writer Brandon Thomas, the series is destined to be a sure fire hit! Dynamite will present all new adventures of the classic robot super-hero! Originally released in 1984, Voltron: Defender of the Universe quickly skyrocketed to be the number one children's program in the United States.  Merchandising rapidly followed and more than 100 different Voltron products were on shelves around the world.

"Voltron is one of the most well-known cartoons of all-time," says Dynamite President Nick Barrucci. "Classic Media and World Events Productions are working with a wide-range of licensing partners to ensure Voltron's success. With the upcoming cartoon and a feature film in the works, now is the perfect time to launch a Voltron comic book for a new era, which will feature amazing Alex Ross covers! Our acquisition of this incredible brand is another step in Dynamite's exciting growth and builds on the ongoing success of our line."

"I grew up loving the big robots from Japan," says legendary artist Alex Ross.  "And Voltron is one of the coolest-looking of them!"

Voltron featured a team of five young pilots commanding five robot lions which could be combined to form Voltron. In an undefined future era, the Voltron Force was in charge of protecting the planet Arus (ruled by Princess Allura) from the evil King Zarkon (from planet Doom), his son Lotor, and the witch Haggar, who would create huge Robeasts to terrorize the people of Arus. "We've been given a lot of latitude by our partners at Classic Media and World Events," said Dynamite Editor Joe Rybandt. "Nothing is off the table and if you've followed our releases featuring pop culture icons, you know that we take the best and add the new and create something unique and special on its own. Expect no different from Voltron."

Founded in 1982 to meet the ever-growing need for the development of quality television entertainment, World Events Productions has continued to be a leader in technological innovation and programming excellence ever since.  Headquartered in St. Louis, WEP has been on the cutting-edge of top quality entertainment production and international distribution.

World Events' more recent program, Voltron: The Third Dimension, was the first full 3D CGI series produced solely in the United States.  However, classic Lion Force Voltron remains the general favorite among fans.  And fans have much more to look forward to in the future as the Voltron Universe continues to expand.